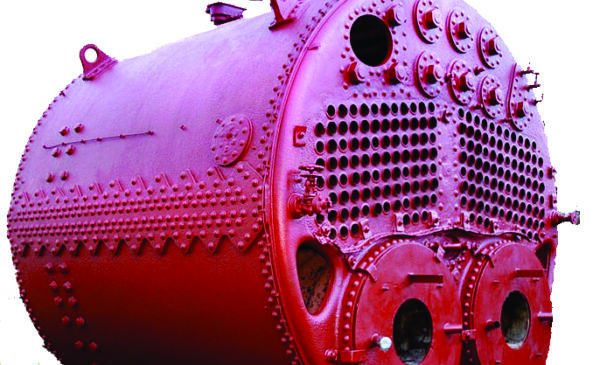 Boilers. Talk about a device that is probably the simplest in concept yet most troublesome in your plant. In addition, it is also the most potentially dangerous. For this reason, NEVER DO ANY MAINTENANCE OR REPAIRS OF ANY KIND ON A BOILER THAT IS HOT OR UNDER PRESSURE.

Now on with the show! As I’m sure you are aware, there are many different types of boilers and many sub-species of tube (water tube, fire tube, tubeless) and other configurations within each type. We are not going to get into the FAQS of each type. Our purpose this issue is to gain an understanding of what a boiler is and how a boiler functions in order to generate steam.

Take a pot of water, put it on a stove and heat it on a low flame. Put a thermometer in the pot of boiling water and if you are at sea level, the thermometer will read 212 degrees Fahrenheit. If you turn the flame up all the way, the water boils more violently and changes to steam at a more rapid rate – but the thermometer still reads 212 F. As long as there is water in the pot, that thermometer will stay at 212 F, or until the cows come home. The steam rises from the surface of the water and disperses into the air without being able to do much in the line of useful work unless you have some vegetables in a steamer above the water in the pot.

If you were able to put a lid on that pot that was tight enough to contain the steam being generated, the pressure in the pot would begin to rise. Since this increase in pressure is also pressing down on the boiling water, it takes more heat energy to force the water to turn into steam. This increase in heat energy is felt as an increase in temperature of the water steam mixture. The higher the pressure inside the pot, the higher the boiling point temperature of the water and steam. There is a direct and unchanging relationship between steam pressure and temperature. It is built into the nature of water. That is why you heat your dry cleaning presses with 80lb steam (324 F) and your laundry machinery with 100lb steam (337 F).

If you had some veggies in the pot they would cook to mush in no time because you have the kitchen appliance called a PRESSURE COOKER with internal temperatures much greater than 212 F. In addition, the space above the water line and the lid is a built-in storage area for the contained steam. At some point, unless you somehow release the steam or turn off the heat source, the pressure will increase until the pot ruptures (explodes). On pressure cookers there is a weighted or spring-loaded relief valve in the lid which controls the internal pressure and also a safety blow-out vent if the relief valve fails.

Let’s start adding components to the PRESSURE COOKER in order to create a boiler. I’m going to use the example of a gas fired boiler for this article.

Whew! There you have it. Finally I can stop all this PRESSURE COOKER analogy stuff and call this contraption a boiler. Next issue will be devoted to refining this boiler and designing the system that supplies steam to the machinery and handles the returning condensate. 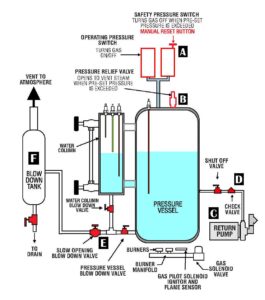 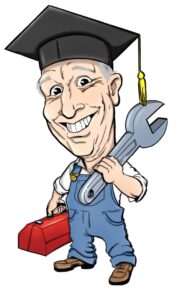 Bruce Grossman is the Chief of R&D for EZtimers Manufacturing. EZTIMERS MANUFACTURES MACHINES THAT MAKE YOUR MACHINES RUN BETTER. For those needing to replace ZERO-WASTE or GALAXY misters, see our SAHARA model; for those with boiler problems, check out our EZ-LEVEL and EZ-DOSE machines. For further information on EZtimers products, visit  www.eztimers.com Please address any questions or comments for Bruce at bruce@eztimers.com  or call 702-376-6693.